If you want to get out of the city and tour the English countryside, consider making the trip to Salisbury. You will find the city easy to navigate and full of English charm. Some of the best things to do in Salisbury UK is to visit Salisbury Cathedral where you can see a copy of the Magna Carta, walk Old Sarum and explore the first settlement, and enjoy the Medieval architecture that lines the streets.

How to Get to Salisbury from London

The easiest way to get to Salisbury from London is via train. It takes an average of 1.5 hours.

You should have no trouble finding a train to Salisbury as 30 trains per day go from London to Salisbury and will be able to book your train in advance or purchase your ticket at the train station.

If you are driving to Salisbury, it is a 2-hour drive on the M3, but you could easily plan to visit Stonehenge & Avebury on the way to break up the drive.

Best Things to do in Salisbury UK

Old Sarum is the site of the earliest settlement of Salisbury.

What was once a Roman fort became a Medieval Castle in the time of William the Conqueror.

All that remains today are the stone remnants.

You can also view the footprint of Salisbury’s first cathedral in Old Sarum.

Just five days after its consecration in 1092 it was destroyed in a storm. Later, it was rebuilt and extended.

Just 200 years later it was demolished and a new cathedral was erected on another site using the stones of the former.

Walk over the hilly landscape, venture on what’s left of the castle walls, and take in the views from atop the hill. It is easy to see why this location was chosen for a castle.

Entrance is free to those carrying an English Heritage Pass. There is a small fee for those who do not.

Completed in 1238, Salisbury Cathedral, formally known as the Cathedral Church of the Blessed Virgin Mary, is an example of early English architecture.

The interior has beautiful Gothic vaulted ceilings, scissor arches, and stained glass windows. The exterior is stone and has the highest spire (404 ft) in all of the United Kingdom.

With massive stone walls and arched columns, the sunlight peering through the windows casts a beautiful glow throughout the cathedral.

Inside the sanctuary of Salisbury Cathedral, on the left wall, you will find a replica of the cathedral and one of the oldest working clocks in the world (dating back to 1386).

Originally located in the cathedral’s bell tower, it is made of hand-wrought iron and has no face like traditional clocks today.

People would know the time by the number of times the bells would ring.

This church not only has the highest spire in England but has the largest cloister in Britain.

The two cedar trees in the center were planted in 1837. It is easy to sit back and meditate on life while viewing the well-manicured lawn and beautiful stone archways.

While here, be sure to take some time to see the Magna Carta.

If you are unfamiliar with the Magna Carta, it is a document that provided laws for sovereigns to govern by. It became a symbol of freedom from oppression for all.

The Founding Fathers of the United States of America used the Magna Carta to assert their liberty from the English crown in 1776.

The chapter house displays the best-preserved of the four surviving original copies of the Magna Carta.

While in the chapter house, be sure to pay attention to the details in the stonework. It is quite lovely.

While Salisbury Cathedral is an artistic masterpiece by itself, the church welcomes outside artists to feature their own works on the grounds.

There is even an Arts Advisory Committee that works to create a program of art exhibitions that is free to the public.

While we were there, their was an event for the 800th anniversary of the Magna Carta that featured modern sculptures of barons painted by local artists.

Entry to the Cathedral is FREE

When it comes to Medieval architecture in Salisbury, the best place to visit is Butcher Row. Here you will find quaint shops, cafes and pubs with outdoor seating.

We stopped by the Market Pub to grab a pint along with some fish & chips! We were there on the weekend and were able to enjoy live music while we enjoyed our drinks outside.

Where to Stay in Salisbury UK

When it comes to spending the night, you will find many different places to stay. There are many bed & breakfasts and hotels within walking distance of the best sites in Salisbury. 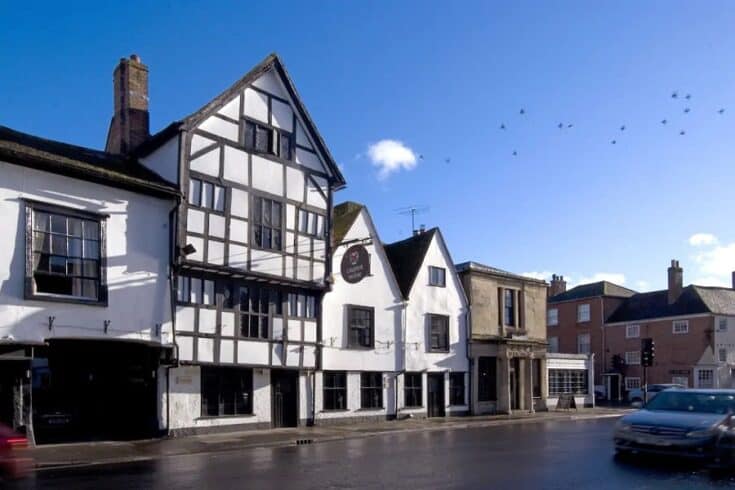 Located near the train station, this historic inn offers a free breakfast and wifi!

Have you made the day trip from London to Salisbury? What was your favorite part?

This place is interesting. Definitely worth a visit. I felt transported to the medieval times. Great post, thanks for sharing.

Oh, wish I had known about it when I was visited Stonehenge 2 years back. Found small towns of UK very beautiful. Great way to spend your day.

What a great town. I just adore the architecture of the cathedrals in Europe, so gorgeous! Thanks for sharing these great tips, I'll be saving your post for future reference :)

Oh wow, especially the cathedral looks so amazing. Stonehenge is on top of my list for my next UK visit. I guess I should add Salisbury as well :)