A trip to Scotland wouldn’t be complete without spending at least one day in Edinburgh. During your day trip, you will be able to see a Royal Yacht, Palace, Castle and a Museum among other landmarks!

Established as the capital of Scotland in the 15th century, Edinburgh is the seat of the Scottish Government, the Scottish Parliament and the supreme courts of Scotland.

Because of its unique blend of Medieval and Georgian architecture, it has been listed as a UNESCO World Heritage site.

You will find navigating Edinburgh on your own very easy! It is very pedestrian friendly and like big cities in the UK, it has a great transportation system that will get you where you need to go.

While one day in Edinburgh doesn’t allow you to see all the top sites this city has to offer, it does give you a good glimpse at why this is one of the most visited places in the UK.

How to Spend One Day in Edinburgh, Scotland

Start your day by taking the Hop on Hop off Bus (the Majestic Line) over to the The Royal Yacht Britannia.

The Majestic Bus Tour begins in the city center and takes you out to three different destinations: Royal Botanic Garden Edinburgh, The Royal Yacht Britannia and the Palace of Holyroodhouse.

With your Royal Edinburgh Ticket, you will be able to tour the The Royal Yacht Britannia. This tour will take you above and below deck into the private rooms of the Queen and her family.

Stay on the Majestic Bus and head to Palace of Holyroodhouse, the Queen’s official residence.

One of the most famous monarchs to live at the Palace of Holyroodhouse was Mary, Queen of Scots’. With the audio tour, you will learn about her life in the palace and get to see the rooms in which she spent much of her time.

During your tour, you will also get to see the Royal Dining room which features a silver banqueting service presented to King George V and Queen Mary to mark their Silver Jubilee in 1935, the Throne Room that the Queen currently uses for formal occasions and The Privy Chamber that is used to host visiting dignitaries.

There is NO PHOTOGRAPHY permitted inside the Palace.

Outside the Palace (in what was once a cloister) is Holyrood Abbey. Founded by David I in the 12th century, the abbey was destroyed during the reformation and what you will see is all that remains.

This museum presents the history of Scotland from the time dinosaurs roamed the earth to present day along with fascinating exhibits from other parts of the globe. 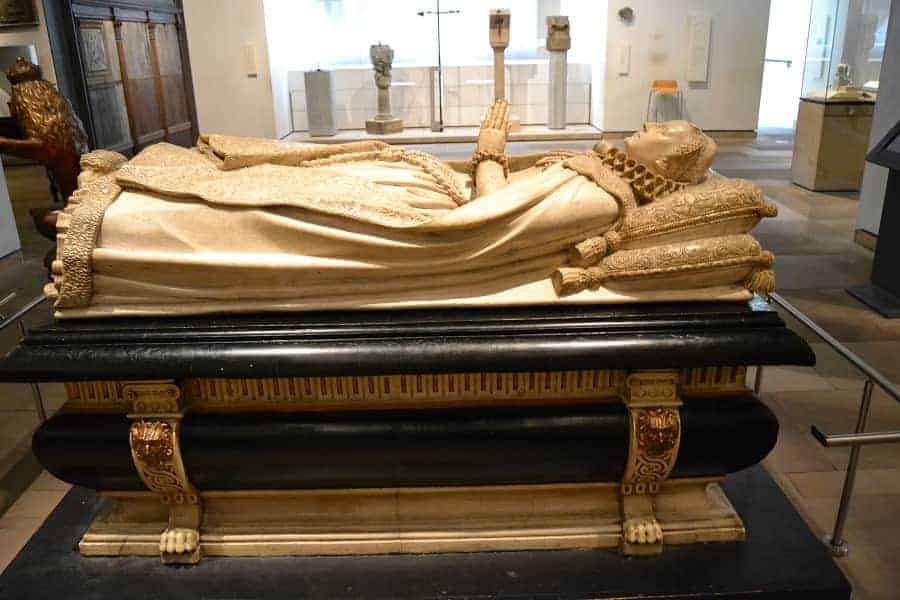 Be sure to give yourself plenty of time to explore the 20,000 artifacts that fill its collection!

The highlight of the National Museum of Scotland is the interactive science and technology center that allows kids to explore with their hands!

This Castle which sits atop the city has been the home to many different kings and queens since the 11th century. A day in Edinburgh is not complete with out visiting this iconic landmark.

Before you even enter the castle, take some time to enjoy the beautiful views of the city below.

Inside the castle, you will be able to see things like the Great Hall (completed in 1511) for Kings James IV and the room where Mary, Queen of Scots gave birth to James VI (1566).

James VI became king of Scotland at a year old and was responsible for uniting Scotland and England.

One of the highlights is being able to see The Scottish Crown Jewels (referred to as the Honours of Scotland). The crown, scepter and sword of state were first used together for the coronation of Mary Queen of Scots.

Also in the space is the Stone of Destiny, used for centuries to inaugurate monarchs.

There is no photography in this area.

The first king of Scotland who lived here was Malcolm III Canmore (reigned 1058–93) and his wife, Margaret, is commemorated in St. Margaret’s Chapel. It is the oldest building on the castle grounds and sits at the highest point.

I know it is hard to believe that you can see so many things when all you have is one day in Edinburgh. The key is to start your day early.

The Royal Yacht Britannia opens as early as 9:30 during the spring and summer months (10 otherwise). This means you should plan on taking the Hop on Hop off bus in Edinburgh over there first thing in the morning when they open (9:05).

Plan to tour the castle in the late afternoon (4pm ish). The last entrance time is 5pm and it closes at 6pm in the spring & summer. Back it up one hour for all other times of the year.

You will find the Edinburgh Castle is less busy later in the day, which means you can enjoy it more!

Also make sure that you leave yourself plenty of time to eat and explore the city!

This unique ticket is something you want to consider getting while spending the day in Edinburgh. Valid for 48 hours, The Royal Edinburgh Ticket includes fast track admission to three major attractions on this day trip list and access to the Hop-on, Hop-off Bus Tours.

There is so much to see in Edinburgh that you will want to make the best use of your time there.

Have you been to Edingburgh? What was your favorite thing to see there?