When touring Rome, you should consider a day trip to Vatican City.  Taking the trip from Rome to Vatican City will allow you to see three main attractions: St. Peter’s Basilica, The Sistine Chapel and the Vatican Museum.

Vatican City is the smallest country in the world, with just over 100 acres. It is completed encircled by Rome which makes visiting the Vatican while in Rome quite easy to do.

In order to make the most of your time in Vatican City, you will need to plan your trip in advance.

How to Make the Trip from Rome to Vatican City

If you are visiting Rome and planning to try to do the Vatican City in a day, you have a few options. You can take a bus, the metro, a private car service or a taxi from Rome to the Vatican.

You could also walk, but depending on where you are in Rome, that might not be the most feasible option, especially when time is of the essence.

We recommend taking a taxi from Rome to the Vatican City because it is affordable and takes you straight to where you want to be.

Trust me, you’ll do enough walking in the museum. No sense having the extra walk from the metro station or bus stop.

The trains are really nice and fairly inexpensive.  Just be sure to check the train schedule and give yourself plenty of time to get back to port (in the event the train runs late or stops for no apparent reason).

You will first want to understand a few things about Vatican City. It is NOT really a city or a town, but a city-state with nearly 600 citizens.  These citizens are either part of the clergy, cardinals or the Swiss guard. Nearly half of the Vatican’s residents live abroad at diplomats in other parts of the world.

You can drive or walk from Rome to Vatican City easily without having to show ID or Passport. While there is a train station, no one really uses it.

The Vatican City is governed as an absolute monarchy with the pope at its head. Even though Vatican City is the headquarters of the Roman Catholic Church, you don’t have to be Catholic to appreciate this city-state has to offer.

If you know in advance that you are going to travel to both Rome & Vatican City, you should consider getting the Omnia Rome & Vatican Card. It will pay for itself in no time!

Vatican Itinerary of What to See & Do

The Vatican Museum first opened to the public under Pope Clement XIV. He began the museum as a way to showcase his collections of sculptures of Julius II.

Over the years, other popes added to the collection and now you will find sculptures and art from Egypt to the 20th century (most notably are works from Michelangelo and Raphael).

The Vatican museum is open from 10am-6pm (ticket office opens at 9am/ last entrance is 4pm).

The full walking distance of seeing everything inside would be like walking 9 miles.  You will not be able to see EVERYTHING in one day.  Pace yourself.

When you are on a limited time schedule, you may want to take a guided Vatican Museum Tour so that you see the highlights.

A tour guide can walk you through quickly so that you are able to see the main things most visitors want to see. The problem with this is that you might miss seeing things YOU really want to see.

When you go to the Vatican without a tour guide, you can use the audio guide that is available.  There is also an Audio Guide Family Tour geared more for kids.

Our kids did it and found it to be fun (but time consuming).  The kids might have had just as much fun if we just printed the map ourselves and had them to a seek & find without the audio portion.

I think a better option for those travelling with a limited time frame is to download Rick Steve’s Audio Tour (FOR FREE).It is a bit more self-paced and allows you to choose what you want to see.

Built at the end of the 15th century, this chapel is most known for its ceiling painted by Michelangelo. Be sure to also notice the murals painted by Botticelli along the walls.

When you get to the Chapel, it will be crowded, prepare yourself in advance to not have much space to move around.

There is NO PHOTOGRAPHY in the Sistine Chapel.

This is one of the largest churches in the world and the most impressive example of Renaissance architecture.

What sets it apart from others is that St. Peter’s tomb sits directly below the high altar of the Basilica. While you may be able to visit the tomb of St. Peter, the Basilica reserves the right to limit access.

While touring the Basilica is free, they do charge you if you chose to walk up to the dome:

Outside the Basilica is St. Peter’s Square. This large public square is where the Papal Mass is held twice a week.

One of the magnificent features of St. Peter’s Square is the obelisk. This obelisk that was brought to Rome from Egypt by Caligula in 37 AD.

In 1586, Pope Sixtus V gave order to move the Egyptian Obelisk to the right side of the St. Peter’s Square where it stands now. 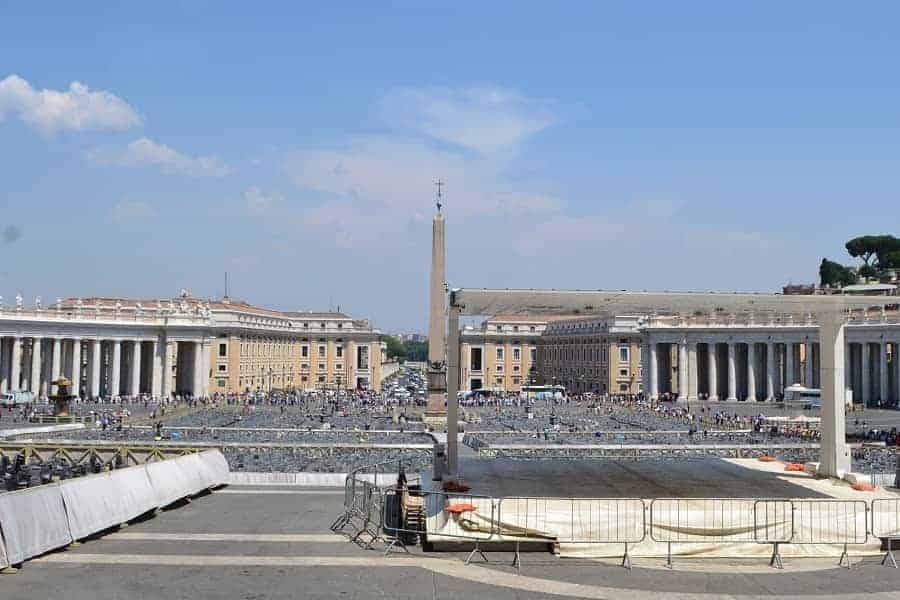 Seeing the Pope at the Vatican

The key to getting a good view of the Pope is to get there EARLY. When I say early, I mean like 2-3 hours early.

If you don’t want to attend the Papal mass, then I suggest you choose to go on a Monday, Tuesday or Thursday (a day when there is not a Papal Mass).

If you do end up going on a day when the Pope is holding mass, allow yourself extra travel time & be prepared for traffic because it is CRAZY.

You need to be covered inside the Basilica and Sistine Chapel. Men can get away with knee length shorts (pants are best) BUT women and girls must cover shoulders and knees.

If you get in a bind, there are several shops outside the Vatican where you can purchase a scarf for fairly cheap. Wrap it around your shoulders or turn it into a skirt that covers your knees.

Purchase your Vatican Museum ticket in advance so you don’t waste time standing in the ticket line. Your ticket also includes access to The Sistine Chapel.

Entry to Vatican Museum is FREE on the last Sunday of the month. It is also crowded.

Have you made the trip from Rome to Vatican? What was your favorite part of your time in the Vatican?

how long does it take for an average family visitor with kids in the tow ( 12 and 7) to see the vatican ?

should i budget around half a day block of time (with the to and fro commute from Rome, cut the queue passes an a local guide?

You probably should give yourself at least 3 hours in the Vatican (add in the time you need to travel to & from Rome). They have a great game for kids to play while they are there (searching for certain items in the museum which is fun) but it is time consuming. My kids loved it (7 & 10) but if you are pressed for time, you may want to avoid it. Be sure to get your tickets in advance (and you will have to book an entrance time) otherwise you could spend an hour in line. You really don't need a guide. In fact, I enjoyed our trip more when we went without one so that we could move at our own pace.

What a fabulous introduction to such an interesting part of the world, steeped in history. I remember travelling there when I was young...this makes me want to revisit :)

Thank you for this post, it's exactly what I was looking for actually. I'm heading to Italy in April and wanted to visit The Vatican during my trip. This is such a helpful guide and has lots of idea of things to do.

Great detailed review! I’ve been here so many times cause my family lives in Rome and I can say you delivered some great tips! Also check out their private morning breakfast with hour early entry. It’s anazjng!

We really enjoyed our times at Vatican city we went super early to avoid the queues and was also slightly off peak so we're lucky. It's a great way to spend a day.